Not enough build firms are fully aware of the hidden, uninsured costs of poor health and safety on site.

That’s the view of experts at build software specialist firm HBXL, who are urging those in charge of site safety to brush up on the implications of health and safety, rather than sweep their responsibilities under the carpet hoping they will go away.

Joanna Mulgrew, director at HBXL said: “A lot of businesses are fully aware of the moral, ethical, financial and legal cost of poor health and safety on site. However what often goes unnoticed, are the many hidden costs of when something goes wrong. These are often uninsured and can amount to a hefty and unwanted bill.”

Backing Mulgrew’s claim is data from the Health & Safety Executive (HSE) which shows that for every £1 insured cost, uninsured costs will be anything between £8 to £36. 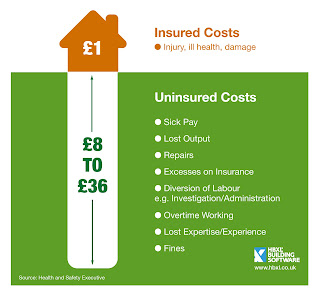 And as the HSE cranks up its Fee For Intervention (FFI) initiative, Mulgrew is warning those embarking on any build project to be extra stringent with their site health and safety or risk the wrath of the law.

She added: “One of the HSE’s objectives was to become self-funding, costing in the region of £23 million per annum. In the 2013/14 financial year it generated £9.6 million which was substantially lower than it had budgeted to recover, so it doesn’t take a genius to work out that there will be no let-up in the HSE’s drive.

“It’s all very well to think that just because you’ve got insurance, everything is covered. But the reality is much more plain.

“If something did go wrong, then there are a myriad of things that will need paying for. We like to think of it as a bit of a health and safety iceberg, where the majority of costs are well hidden!”

Included on Mulgrew’s list of hidden costs are product and material damage, plant and building damage, tool and equipment damage, production delays, overtime and temporary labour, investigation time, the fact that manager’s time will be diverted, potential loss of expertise and experience, damaged reputations and a rise in insurance premiums.

Jo added: “The list goes on and that’s not even taken into account potential fines, imprisonment and the emotional implications of injury to someone you know.”

Joanna added: “These are just two examples of site failures. It’s also worth noting that the last batch of Fee For Intervention invoices issued in December 2014 totalled fines worth £445,000.

“What you don’t want is for HSE to start asking supplementary questions following a minor breach of the rules. They could then find more serious issues leading to bigger fines.

“My view is that prevention is better than cure and by using software tools like Health & Safety Xpert, builders know they have the very latest paperwork to hand. This can then be printed off and placed in a file for all members of the team to read before they start on site.

“Using this type of software also, in my view, differentiates the good builders from the rest and highlights the responsibilities of the client and contractor.

“For domestic clients, if the builder they employ doesn’t inform them of their responsibilities, then they clearly don’t know what they are doing and would be best to steer clear of.

“Those who operate within the law have nothing to worry about but those who think they won’t get caught could at some point be in for a nasty surprise.

“Of course the prevention of death, injury and ill health to those at work and those affected by work activities is paramount.

“The upshot is anyone involved in a build project need to take extra care in the running of their businesses to ensure that law breaches do not occur. This is how any financial penalty can be reduced or eliminated.”

Builders! Six reasons why you need to be on your game…

What’s the worst that could happen?….Health & Safety facts