We often highlight how the HBXL Estimating Service guarantees a high level of accuracy and recently we had proof of this.  A client secretly put us to the test without our knowledge! Read on to find out what happened…

It was a day like any other. Tony, one of our experienced estimators, was handed a set of plans for a large renovation and, just as he normally would, set to work.

As it was a slightly larger job, he returned it within the agreed deadline of 7-10 days with an estimated job cost of £363,707. The customer was pleased with the result and Tony moved on to the next job content in another estimate well done!

Users of the HBXL Estimating Service will already be able to work out the result but for those you haven’t, Tony the HBXL estimator was within half a per cent of the figure they had produced themselves – that’s within two thousand pounds on a 363k job, which we are very pleased with to say the least! How do we know? Because the client phoned us and told all after we had returned the completed estimate to him.

We believe this is a perfect example of why builders and developers choose to get their estimates produce by us and why so many come back for more.

So, did they come back?

Of course they did! They joined the other 94% of our customers that come back for another estimate when they see how a professional quote can help them win more business. Our users have found they have more than doubled their win rate when using the HBXL Estimating Service. Plus, another reason to use us, is that you can include the fee in your estimate as a professional service, so when you win the work there’s no cost incurred by you! 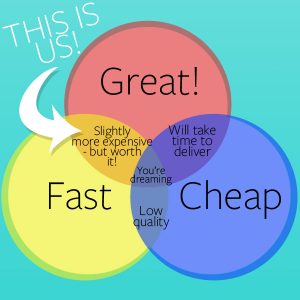 We’re aware that we’re not the cheapest out there but we firmly believe that it’s better to get a job done right the first time around! Our competitors can give a cheaper rate because they offer less detail and cannot guarantee a high level of accuracy due to churning out as many estimates as possible. Based on our 155 years of construction experience we know the care and attention to detail that is required for accurate estimating. Take a look at our helpful Venn diagram to see what is most important to you in the quality Vs speed Vs cost paradigm.

All of our estimators are construction specialists – many of whom have run their own building company.

Test us out yourself!

Fancy a challenge? Why don’t you test us out for yourself? Give us a call on 0117 9167894 or send your plans to estimatingservice@hbxl.co.uk. Your move.

Have you got the 4 cornerstones to a successful project?

The inside scoop on what your competitors are doing